Acorus calamus (aka Sweet Flag) is an aromatic herb with an underground rhizome which is used to produce Calamus Oil. Literature supporting both its therapeutic properties as well as toxicities perturbs (for now) a clear interpretation of what calamus oil’s role is therapeutically, although its exotic nature and beautiful aroma compel me to make it available.

There are at least four types of Acorus calamus reported, native to different geographic regions. Diploid varieties dominate North America, triploid in Europe, tetraploid in Asia (India, East Asia, Japan), and hexaploid in Kashmir (Liu 2013). Different ploidy results in strikingly different compositions of terpenes and related constituents with β-asarone content being the primary concern in relation to toxicity. Triploid or tetraploid varieties have been measured by GC/MS to contain up to 86.9% β-asarone, although could be as low as 3.5%, while diploid varieties typically do not contain any β-asarone (Satyal 2013, Liu 2013).

β-asarone and calamus oil have been shown to produce tumors with oral chronic administration as well as heart, thymus, and liver toxicities in rats (European Commission of Health & Consumer Protection Directorate, 2001). Genotoxic potential of β-asarone has also been shown in vitro (Abel 1987). The FDA has banned calamus and its derivatives from being added to the food supply in the US although small amounts are still permitted in Europe (FDA 21CFR189.110).

In ayurvedic medicine calamus is valued as a nerve tonic with a rejuvenating effect on the mind and nervous system. Rhizomes of the plant have been reported in folklore as having antispasmodic, carminative, anthelminthic, and antidepressant properties which has found some support in recent literature (Kumari 2009). Animal studies using α-asarone and β-asarone extracted from calamus root have shown to have antispasmodic, antimicrobial, anthelminthic, and antidepressant properties (Chen 2013, Han 2013, Kumar 2009, Kim 2011) and paradoxically antiproliferative and anticarcinogenic activity in human carcinoma cells (Kumari 2009).

Let me be very clear: some literature warns of the risks of Calamus Oil. Poland's varietals are often higher in β-asarone content ~ we are NOT recommending any use of this CO2 extract to anyone as the risks may outweigh the benefits.

Due to reported toxicities associated with β-asarone it is not recommended to use calamus oil internally (by mouth). Small amounts with heavy dilution may be appropriate for topical uses (on skin) on sparing occasions such as ceremonial anointment although caution is advised due to essential oils readily penetrating skin and being absorbed systemically (into the blood).

You have Successfully Subscribed! 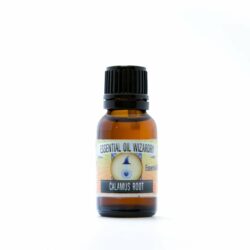 Calamus Oil (CO2)
$25.00 – $35.00
-
+
Add to Cart
0
0
Your Cart
Your cart is emptyReturn to Shop
Continue Shopping
Products you might like
Calculate Shipping
Apply Coupon
X